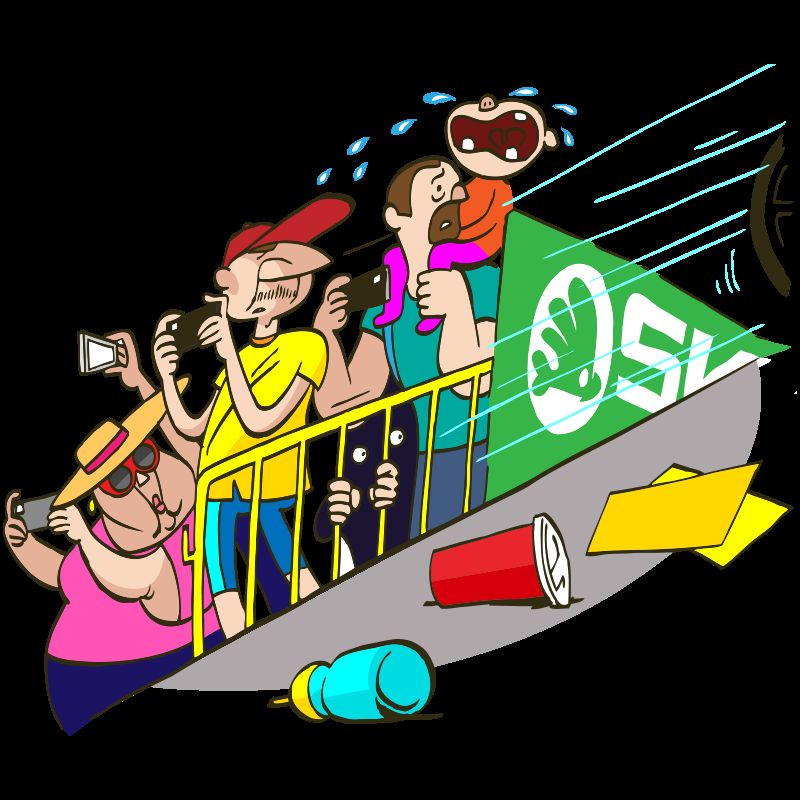 Going to the Tour de France for the first time this year? Or keen to impress others with your knowledge of La Grande Boucle? Afraid of missing out on something important? Below we have added some tips you won’t get at home.

When you watch the race on television, you have a perfect overview of how it is unfolding, you can see who is leading, you count the spacing, and you know about every puncture and duel. Soaking up the inimitable atmosphere, you will witness things the TV can never convey. For example, you will see how fascinatingly fast the leading cyclists are. That hill on the route that you rode up sweating like crazy yesterday?

FLAGS AND OTHER FAN APPAREL

Anyone who has been to the Tour de France knows that no matter how big a flag they take to France, there will always be someone else right by with a bigger one.

Who would not want to bring home a trophy from the Tour de France to display on the mantelpiece? Well, we will sadly have to disappoint all eager collectors. A tossed water bottle is a rarity, and even if one of the racers does drop one, you’d have to be very lucky to get there first. Getting your hands on any other authentic collectible is just wishful thinking.

One survey confirmed that up to 39% of spectators look forward to the caravan of floats more than the race.

FOOD, DRINK AND BITS AND BOBS

You’re in France, so food paradise

Camper vans are just as much a symbol of the Tour de France as fans holding flags and painting their faces in their national colours. Anyone who owns a camper van is king. However, it is necessary to arrive well in advance of the itinerary

The Tour de France is an extraordinary opportunity to try out what it is like to ride the routes of the stages where the professionals battle it out. Even a couple of hours before the expected peloton arrives you can jump on your bike and pedal away.

15 YEARS OF PARTNERSHIP BETWEEN THE TOUR DE FRANCE AND ŠKODA

This is carmaker ŠKODA’s 15th year as the general sponsor of the Tour de France, the legendary annual cycling race. Besides laying on a large fleet of cars, ŠKODA AUTO also designs the winners’ trophies. This year, the designers have teamed up with Bohemian glassmakers to produce 60 cm tall trophies weighing in at 4 kg for the champions of the 105th Tour de France. In the 2018 event, the racers have to surmount 3,329 extremely tough kilometres over 21 stages.